He speaks with an English accent that could cut glass, has been called a genius and is creating personality profiles of every voter in America.

Describing Alexander Nix, the CEO of data and communications agency Cambridge Analytica, can feel like describing a James Bond villain. And if you’re wedded to the idea that great advertising is the result of intuitive creativity, you might come to think that’s more than coincidence.

It won’t help to add that Nix’s agency is working with Donald Trump, the divisive Republican candidate for the US presidency, but the GOP is a fundamental part of Cambridge Analytica’s story.

‘The genesis of Cambridge Analytica was to address the vacuum in the US Republican political market that became evident after [Mitt] Romney’s defeat in 2012,’ says Nix, characteristically precise and eloquent.

He continues: ‘The Democrats had ostensibly been leading the tech revolution, and data analytics and digital engagement were areas where Republicans had failed to catch up. We saw this as an opportunity to leverage our international track record in global political campaigns to enter the political market in the US and address this need.’

Cambridge Analytica was beget by SCL, a behaviour change agency established over 25 years ago with the ambition to replace creative communications with something more rigorous.

‘Specifically, it was trying to understand how you could integrate science with communication to replace creativity; not in its entirety – creativity is still often used in the execution – but certainly in research and strategy.

‘This was important was because the clients we were interested in servicing were not necessarily vendors of products like Mars Bars […] We work with governments, militaries and aid agencies on things where simply taking a creative approach and hoping it resonates – the “Beanz meanz Heinz” and “Coca Cola is it” stuff – isn’t going to work.

Cambridge Analytica combines SCL’s research on behaviour and psychology with data modelling and analytics to create ‘a workable model of persuasion’, as Nix puts it.

The agency had successes in the 2014 US mid-term elections but it only really became a media fascination after its work on Ted Cruz’s GOP nomination campaign in 2015, and after the senator’s surprise win at the Iowa caucus in February 2016.

Reports fixated on Cambridge Analytica’s use of psychographics to target people. Cambridge Analytica uses the Ocean (or Canoe) personality test, measuring people for openness, conscientiousness, extraversion, agreeableness and neuroticism, and then serves them ads that most appeal to their dominant trait.

Nix says Cambridge Analytica’s methodology has been rigorously tested and that it also includes demographic and geographic targeting, but commentators still note that there’s no proof that psychographic targeting is more effective than demographics.

Ad Age reported in August that Cambridge Analytica had received mixed reviews from political consultants in the US; Trump’s team has still chosen to work with the agency, although reportedly on a smaller scale than Cruz.

To allay doubts, Nix says his agency offers a ‘fairly economical pilot’ where the client targets 50,000 people in the traditional way and Cambridge Analytica targets another 50,000 using its own methodology.

‘Then they can do a simple A/B test to work out the uplift that we’re able to deliver for them and then it’s easy for them to make a decision on whether they want to scale that,’ he says.

‘We’ve been doing that for commercial and political clients for two or three years and a lot of the research is done by third parties to ensure it is transparent. And we’re so confident in the results that we’re using it as a sales drill.’

Psychographics is still Cambridge Analytica’s calling card, but Nix says the agency’s biggest strength is its talent (more than 40 data scientists, of which around 30 hold PHDs) and the data models they can produce. Many agencies claim to be experts with data, says Nix, but few can match Cambridge Analytica’s rigour.

‘There are some truly excellent agencies out there pioneering in data, but for the vast majority the research is used to post rationalise a creative execution,’ he says. ‘It’s a bunch of geniuses coming up with an idea, like “let’s use a gorilla playing the drums to sell chocolate”, and it may or may not work. In that instance it did work, but I can tell you that it was not a data-driven solution.

‘Our approach is bottom up. We prefer to speak to 50,000 people, find out empirically what the drivers for behaviour are and then go to the agency. We’ll give them the most refined and nuanced brief that they have ever received in their life: what their audience looks like, what their triggers are, what their levers of persuasion are, what imagery they should use and what language they should use. Then they can be as creative as humanly possible to create the best advertising.’

Nix is not oblivious to how the average person on the street feels about his vision for the future of advertising. He knows many people feel collecting up to 5,000 data points on people sounds intrusive.

But he counters this by saying that all of this information is ‘freely available and given up freely’, and he sound genuinely excited when he talks about a future where no one is served ads for products they couldn’t give a toss about.

‘In the way that TV is changing the way we choose content, I wonder if people won’t see it as a logical extension of that […] we are beginning to choose what kind of advertising we receive because we don’t want to be bombarded with loads of irrelevant information.’ 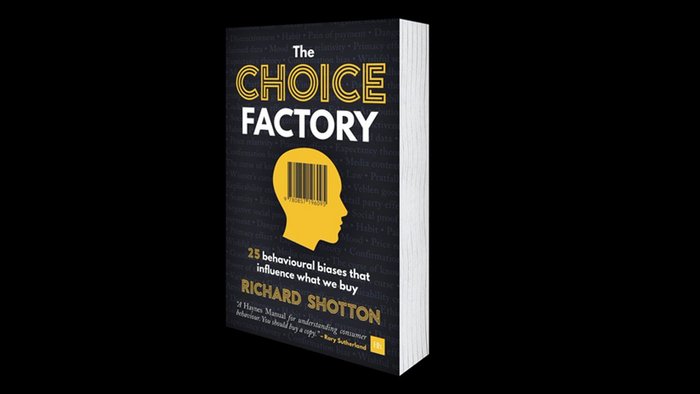 An interview with Richard Shotton /